Pluripotent stem cells either embryonic (ESCs) or induced pluripotent (iPSCs) are characterized by unlimited self-renewal and the capability to differentiate into all specified cell types of an organism. Murine ES cells have been isolated for the first time in 1981 by Evans and Kaufmann, thereby they have created a new platform for in vitro differentiation into different tissue types and established new perspectives in terms of generation of transgenic animals. Less than two decades later, in 1995, Thomson et al described the generation of ES cells from human embryos. In 2006, the lab of Shinya Yamanaka pioneered the field by the generation of induced pluripotent stem cells upon expression of certain transcription factors.

Our lab focuses on the differentiation of specific stem cell types, in particular human pluripotent stem cells and murine ES cells to certain lineages. Thereby we use ES cells as a tool to dissect the impact of chemical compounds, physiological signaling peptides or specific genes on in vitro differentiation of the pancreatic lineage. 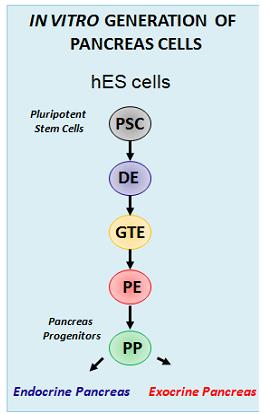 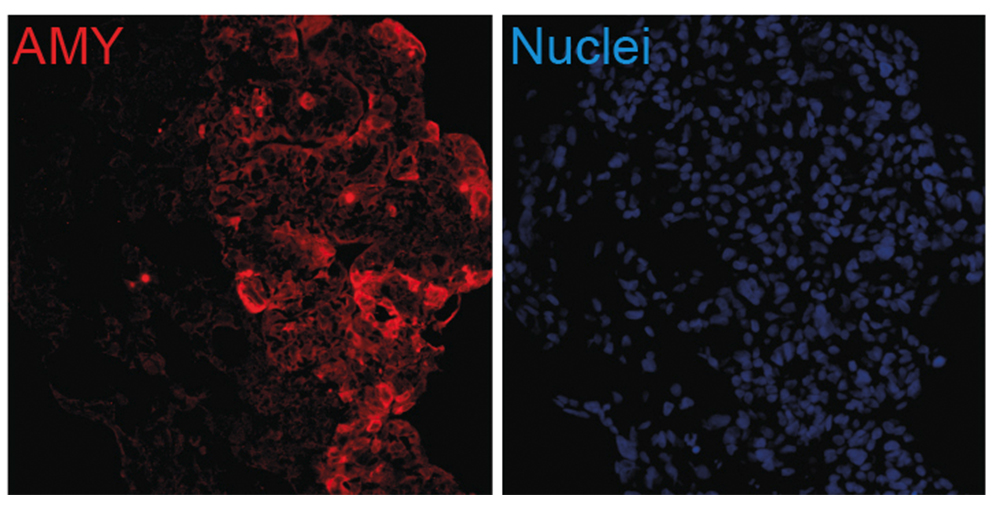 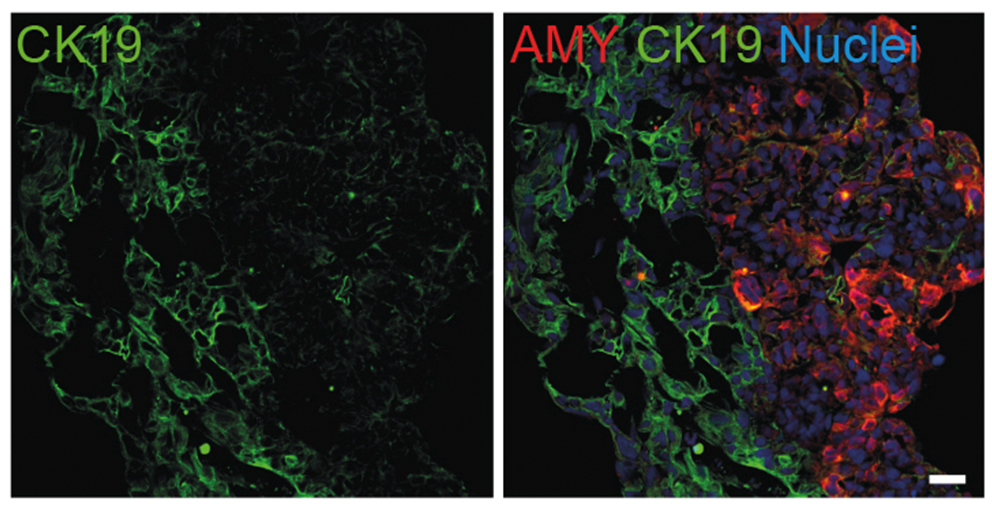 Dr. Meike Hohwieler completed her Master studies in Molecular Biotechnology at the Technical University of Munich and joined the Kleger lab in 2012. Here, she participated in the International PhD programme in Molecular Medicine of Ulm University and obtained the doctoral degree with her work on “Human Pluripotent Stem Cell-derived Pancreatic Organoids to Study Cystic Fibrosis in a Dish”. Since 2016 Meike is working as postdoctoral fellow on projects to model exocrine pancreatic diseases using genetically engineered human pluripotent stem cells and patient-derived iPS cells.

Dr. Sandra Heller graduated in the field of biology in 2010 at the University of Leipzig and received her doctoral degree for her thesis “Complementation of cells lacking mitochondrial DNA (mtDNA) with exogenous mtDNA and analysis of mitochondrial function” in 2014. After her postdoctoral research at Tulane University (New Orleans) studying the role of lipid droplets and mitochondrial function in intestinal inflammation, she joined the research group of Prof. Kleger in 2017, where she focusses on pancreatic development using human pluripotent stem cells (PSC). Most recently she received the prestigious Lush prize for her work dealing with endocrine differentiation of human PSCs.

Jana Krüger studied Biological Sciences at the University of Constance. After that she continued her studies at Ulm University, where she joined the Master program for Molecular Medicine. For her Master thesis with the topic “PDAC associated mutations in a pluripotent stem cell model” she joined the lab of Prof. Kleger, where she is now still working as a PhD student. Currently, she is generating different fluorescent reporter stem cell lines as a tool to investigate and improve pancreatic exocrine and endocrine differentiation of pluripotent stem cells to model pancreatic diseases like PDAC or diabetes

Dr. med. Michael Melzer has been trained as an MD and graduated in 2019. During his doctoral studies, he was investigating oncolytic viruses in combination with T cell receptor transgenic T cells for the treatment of leukemia. Since September 2019, he is working as a resident in the Department of Urology in Ulm (Head: Prof. Dr. Christian Bolenz). As a clinician-scientist, he focuses on pancreatic cancer initiation and progression in the group of Prof. Kleger. He is investigating stem cell-derived approaches for a better understanding of molecular processes during different steps of carcinogenesis.

Sarah Merz is currently studying Biochemistry at the University of Tübingen. She joined the group in August 2020 for her master thesis. Here, she is part of the exocrine pancreatic differentiation team and optimizes protocols for the differentiation of pluripotent stem cells to pancreatic progenitors. After her master thesis, she will continue working as a PhD student in the lab.

M.Sc. Chantal Allgöwer studied Industrial Biotechnology in Ansbach and following attained her master’s degree within the program of Pharmaceutical Biotechnology at the University Ulm and the University of Applied Sciences Biberach. During her master’s thesis at the Clinic for General and Visceral Surgery at the University Hospital Ulm, she evaluated the effects of CDK9 suppression in pancreatic cancer and gained firsthand experience establishing patient-derived pancreatic cancer organoids. Chantal joined the Kleger lab in April 2021 as a PhD student, where she is focusing on the role of early oncogenic driver genes using pluripotent stem cell-based models in order to obtain a deeper understanding of pancreatic carcinogenesis.

Paul Lopatta studied Molecular Medicine in Freiburg and started working on pancreatic cancer and the impact of the protease ADAM9 in the lab of Prof. Oliver Schilling during his B.Sc. studies. During his M.Sc. studies he gathered first experience on iPSC work, differentiation and quantitative IF imaging in the lab of Dr. Ravi Jagasia at the Neuroscience and Rare Diseases Discovery unit of F. Hoffmann-La Roche in Basel, aiming to identify a novel biomarker in the Angelman syndrome. He did his master thesis in the lab of Dr. Ralph Fritsch in Freiburg, working with patient derived PDAC organoids and focusing on the establishment of an imaging based three-dimensional invasion assay and the automation of drug testing. For his PhD Paul joined the Kleger lab and is working on resembling the PDAC tumor niche in vitro more closely, utilizing techniques like micro-fluidic chips and bioprinting, striving to ultimately reduce the need for animal models and increasing our knowledge on the development of pancreatic cancer and its different tumor subtypes.

Franziska Birkhofer studies Pharmaceutical Biotechnology at the University of Applied Sciences in Biberach. She joined the lab of Prof. Kleger in September 2021 for an internship and for her Bachelor thesis, which will focus on endocrine cell differentiation.

After her apprenticeship as a biology lab assistant in 2008, Katrin Köhn studied biology at the University of Ulm and received her Bachelor with the thesis „construction and evaluation of new protein tags“. From 2011 till 2013 she went to Erlangen studying cell and molecular biology to reach the Master degree. She wrote her master's thesis in the field of immunobiology and radiation („Influence of fractionated radiation and AnnexinV on immune cell infiltration into CT26 tumors in Balb/c mice“). Afterwards she worked for 3 years at the department of plastic and hand surgery in Erlangen as a biological technical assistant. She joined the Kleger lab in March 2018 to work on exocrine inherited syndromes.

Ulrike Mayr-Beyrle has tremendous experience as medical technician working for several years in different research laboratories. She joined the lab of Prof. Kleger in May 2015 and is supporting the stem cell development and differentiation group. Here, she is involved in culture of embryonic stem cells, different analysis methods such as PCR as well as administration and organization.

Tanja Kuehn is an experienced surgical nurse and a clerk for office management. She is working for many years in different positions in hospitals and offices. She joined the lab of Prof. Kleger in September 2020 dealing with administration and organization.

Claudia Längle has an exceptional experience and knowledge as a chemical technician working for more than 30 years at Ulm University Hospital. She joined the lab of Prof. Kleger in August 2014, supporting our group in molecular (RNA, PCR, clining) and cell biology (histology) techniques. She is involved in all our projects modelling pancreatic cancers in vivo mouse models.

Human induced pluripotent stem (iPSCs) cells can be generated from skin fibroblasts or keratinocytes derived from plucked human hair. The conversion of these easily accessible somatic cells into iPS cells is achieved by overexpression of the reprogramming factors Oct4, Klf4, Sox2 and c-Myc in our case encoded on a polycistronic lentiviral vector.

We apply this tool to establish disease-specific iPS cell lines from patients keratinocytes, thereby providing a system to model and investigate pathophysiological mechanisms of specific exocrine and endocrine pancreatic diseases in vitro. Based on this system, we have generated a large iPSC biobank covering a large set of inherited pancreatic diseases. 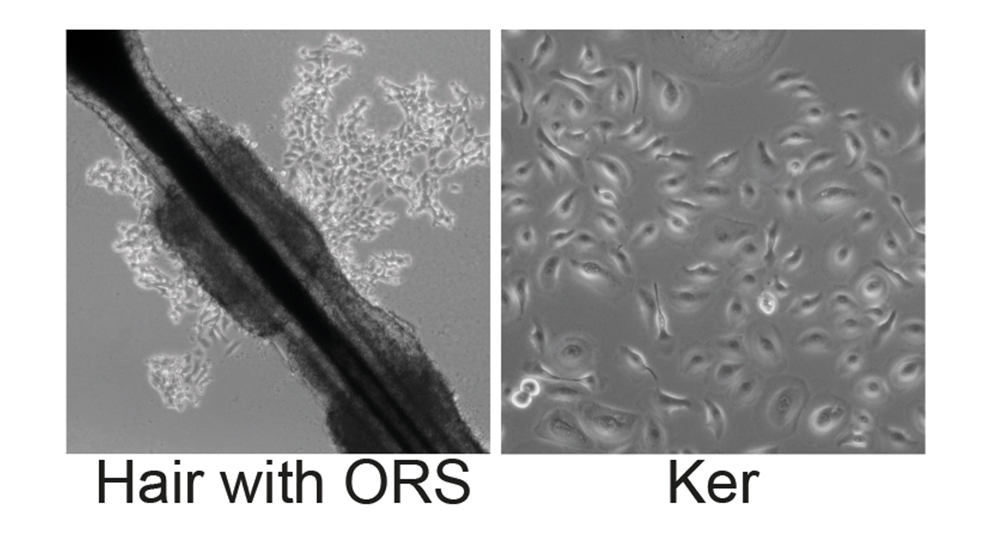 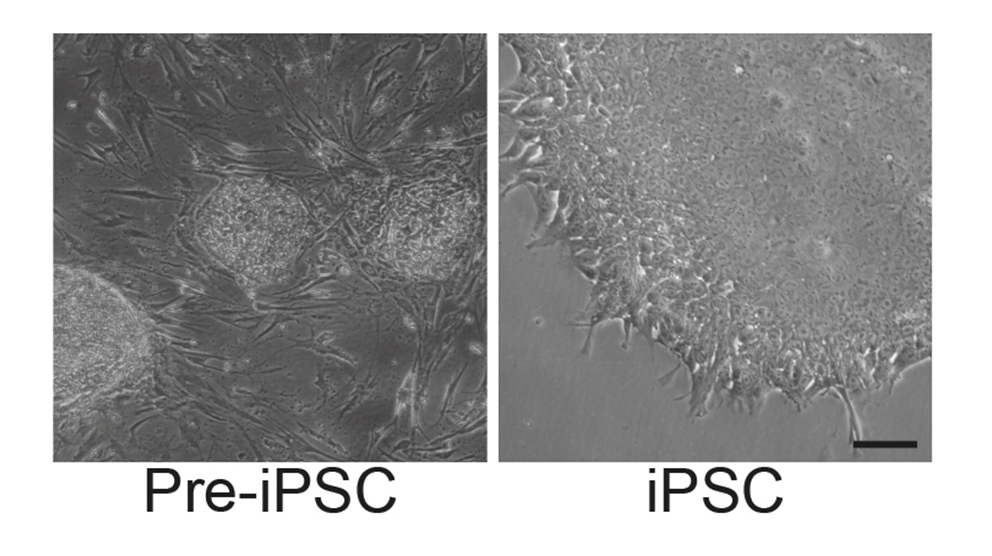 ES cells represent a particularly useful in vitro tool for understanding early mammalian development. In the lab, we use murine and human ES cells in order to dissect pancreatic organogenesis, which occurs as part of a complex developmental program. Due to the differentiation capacity of ES-cells into all cell types of an organism the in vitro differentiation of mouse embryonic or human pluripotent stem cells (hPSC) towards the pancreatic lineage by mimicking embryonic development is a future-leading approach.

The endocrine and exocrine compartments of the pancreas arise from a common pool of progenitor cells found in the foregut endoderm. By application of growth factors, cytokines and small molecules we modulate signaling pathways involved in pancreatic organogenesis in vivo, including Wnt, TGF-β/nodal/activin, FGF,  retinoic acid, SHH  and BMP/Nodal signaling.

Thereby we generate cells expressing the endodermal markers Sox17/FoxA2 at definitive endoderm stage followed by the next differentiation stage giving rise to pancreatic progenitor cells expressing the specific transcription factor Pdx1. Using virtually pure cultures of pancreatic progenitor cells, we focus on both the exocrine and endocrine lineage to study mostly genetically determined human disease. A particular scope lies in novel genetic variants leading to early onset of diabetes, which we study using in vitro generated beta-cells. On the other hand, we have set up a differentiation platform to derive mature pancreatic exocrine and ductal organoid cultures allowing to investigate this lineages either. Herein, a recent study from our laboratory phenocopies pancreatic fates of cystic fibrosis in a dish (Hohwieler, GUT, 2017). 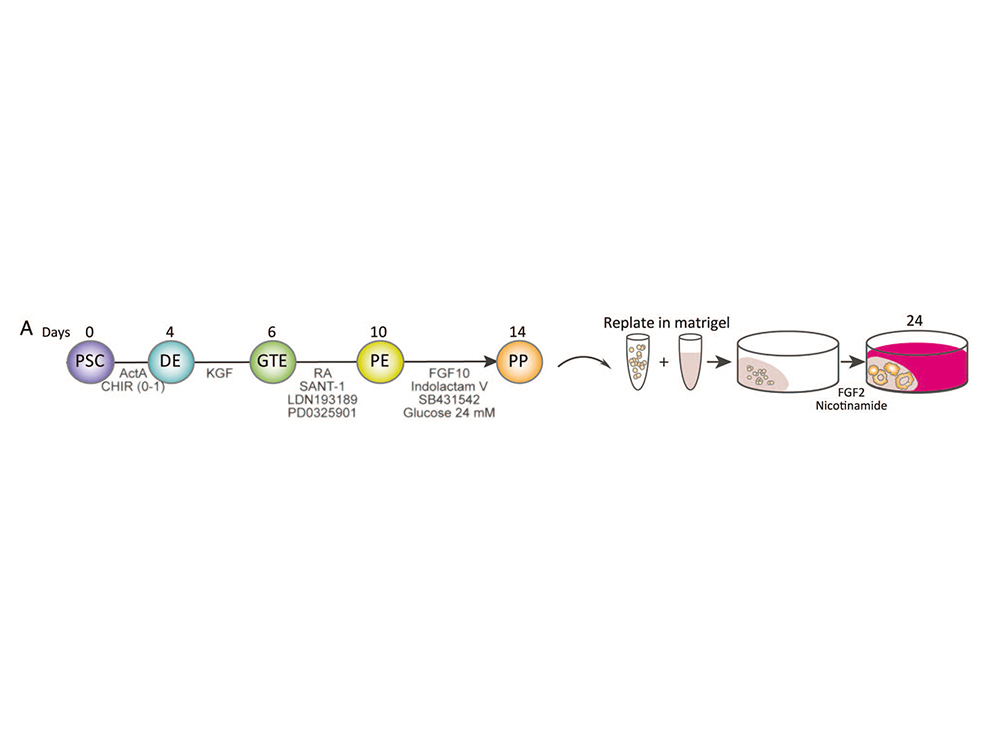 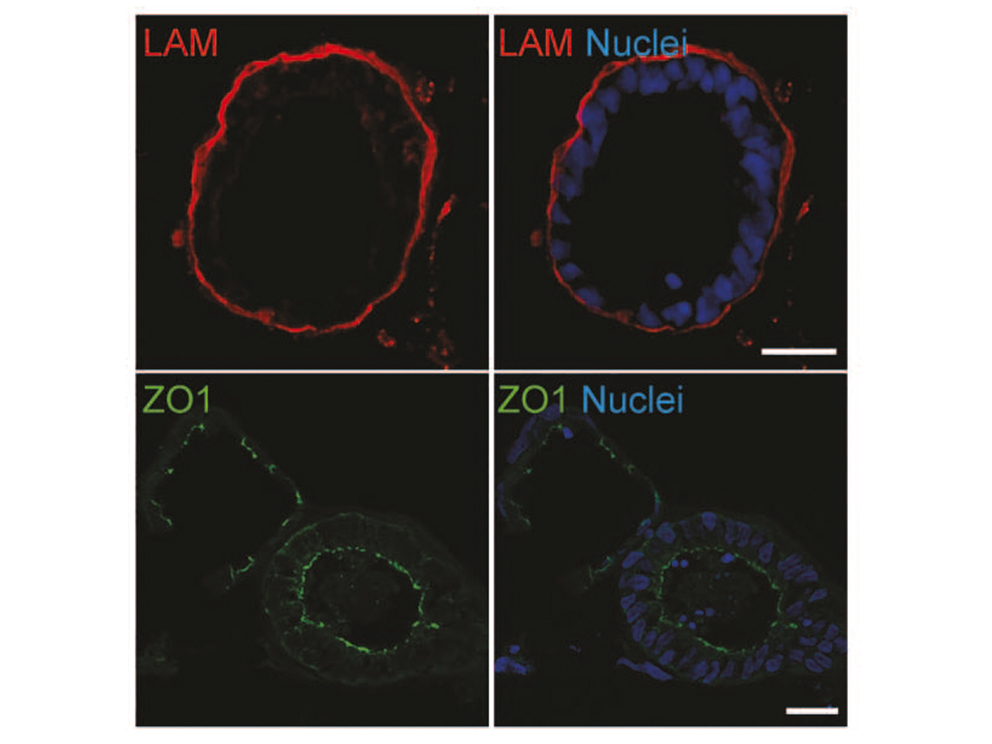 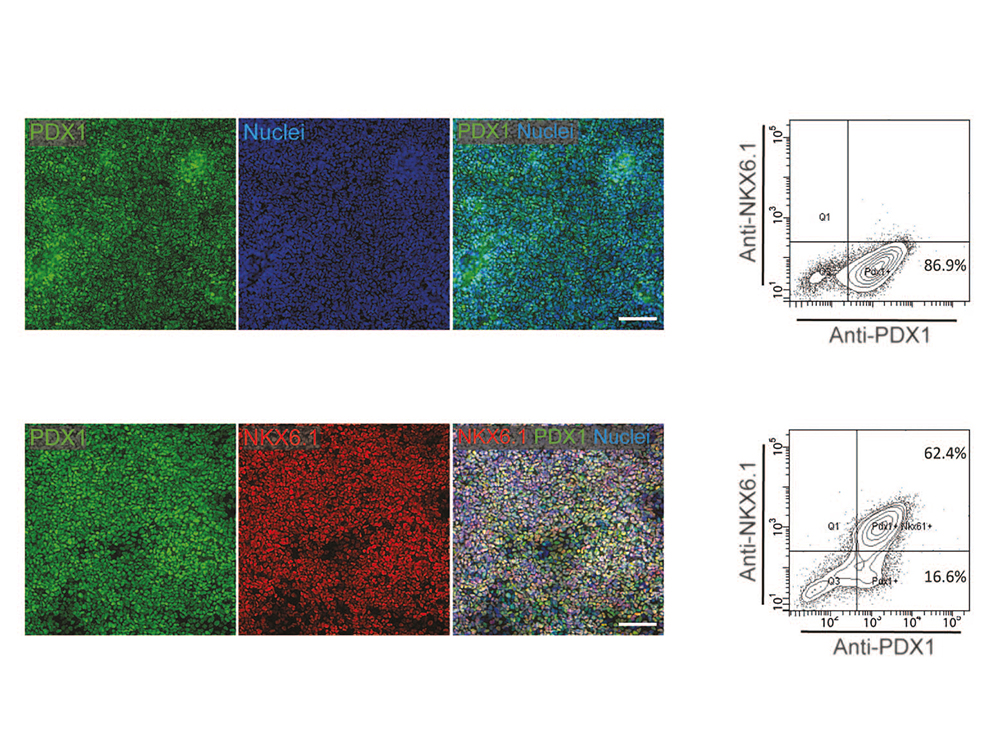 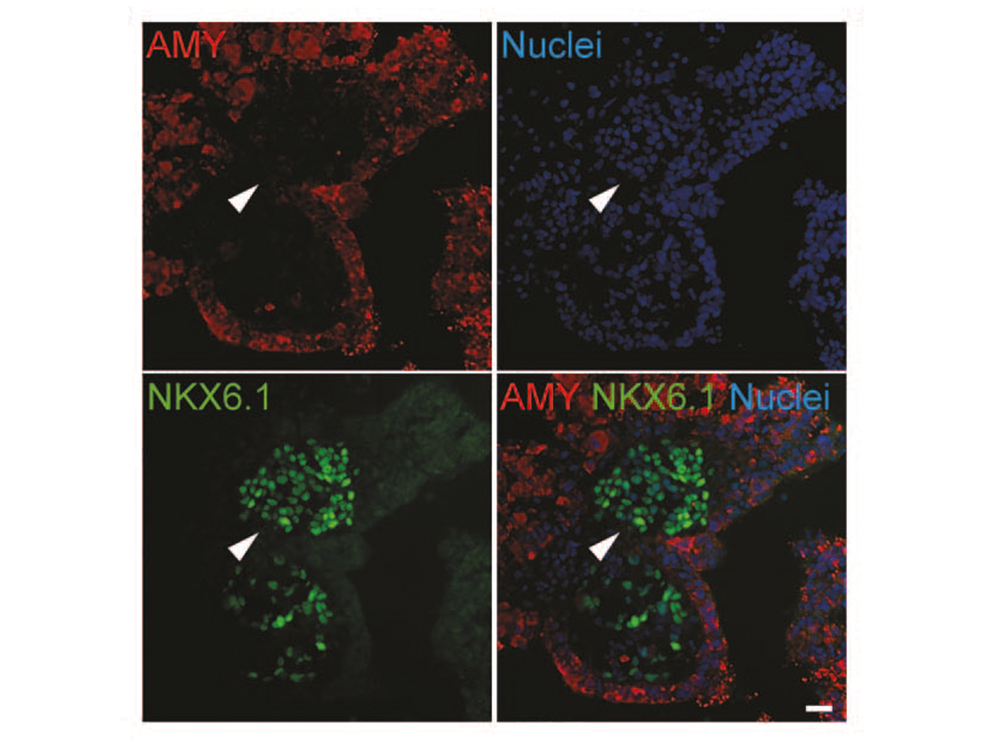 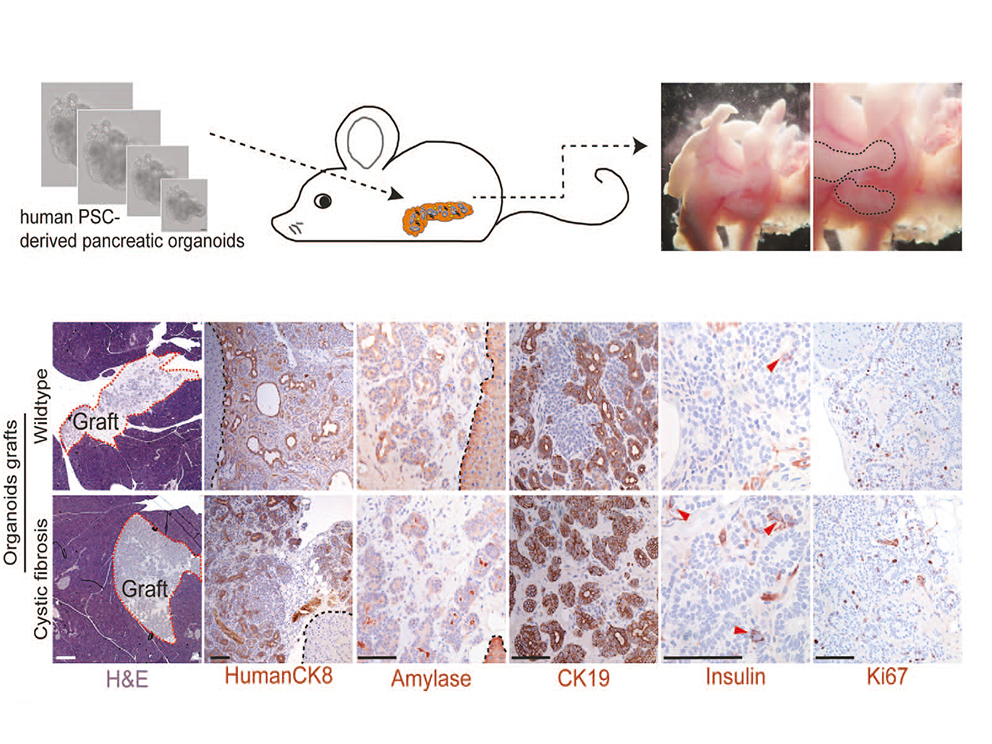 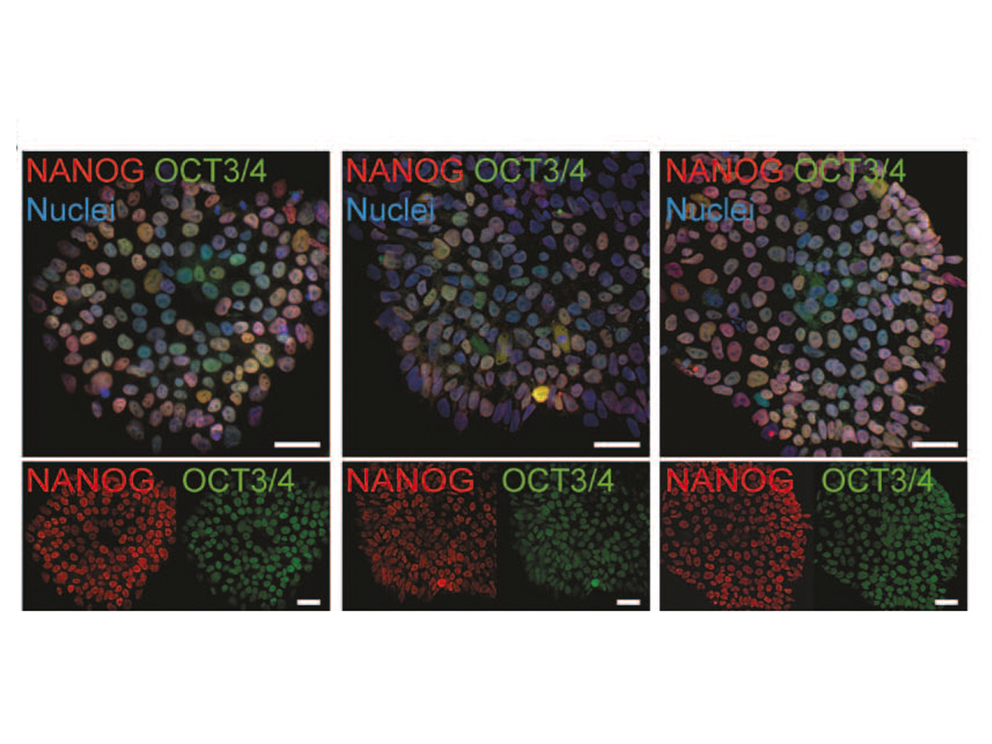 Monogenic diabetes accounts for approximately 1-2% of diabetes cases and results from mutations that primarily reduce β-cell function. The identification of the genetic basis of these diabetes forms has translated into novel avenues of personalized medicine in the diabetes field. We have identified several new genes being linked to monogenic diabetes by genome wide association studies.

The current study aims to dissect the functional role of some of those genes using two major systems. First, the mutations will be recapitulated by gene targeting of human embryonic stem cells harbouring an inducible variant of the respective mutated cDNA. These cells will be differentiated to functional beta cells and the respective intermediate stages and profiled by transcriptomics and proteomics. We hope to get deeper insights into the onset of genetically caused diabetes by our research. 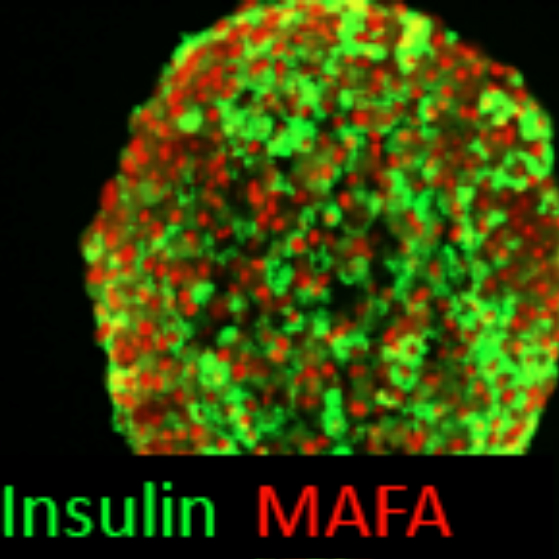 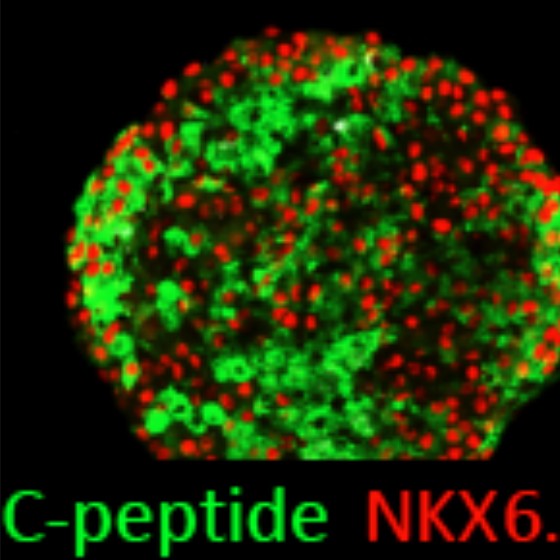 Thorough investigations to understand the underlying molecular mechanisms of pluripotency over the last years opened new perspectives to utilise stem cells more effectively, not only in the field of developmental biology, but also in regenerative medicine. However, recent evidence suggests that a number of these factors comprise multiple roles in (i) regulation of the stem cell fate itself, in (ii) exiting the stem cell state as well as in (iii) modulations determining early but distinct cell fates. In that context, we are particularly interested in the T-box factor 3 (Tbx3) and its role to regulate pluripotency and early lineage segregation (Bertolessi, Stem Cells Dev, 2015).

We could show that forced expression of Tbx3 directs mesendoderm formation (Weidgang, Stem Cell Reports, 2013), while diminished Tbx3 expression correlates with various and distinct developmental stages and pluripotency capacities (Russell, Stem Cell Reports, 2015). In future studies we aim to dissect the mechanism how the loss of Tbx3 affects differentiation capacity and pluripotency in more detail. 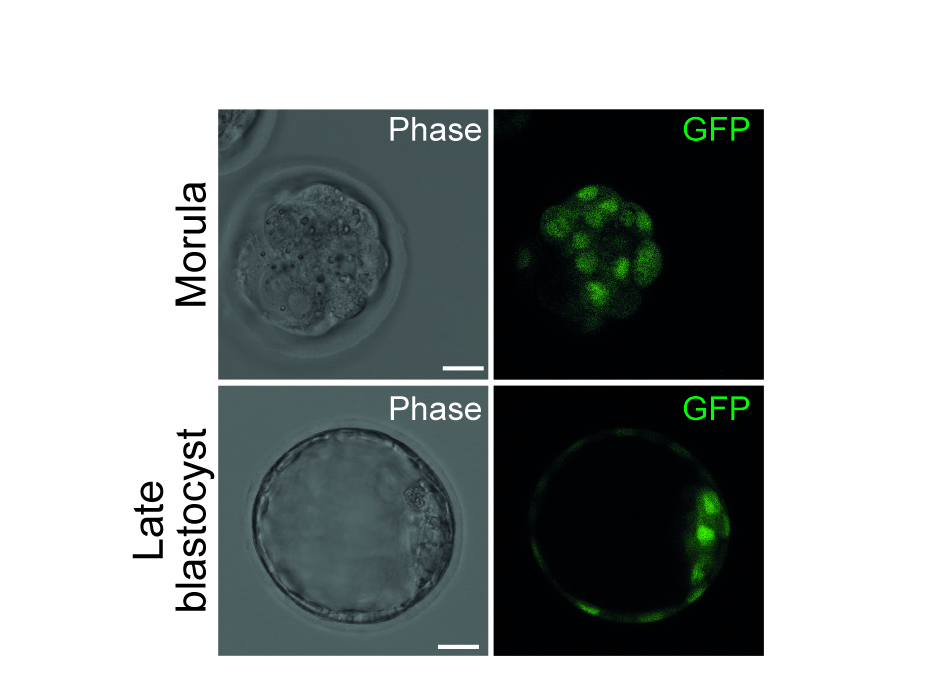 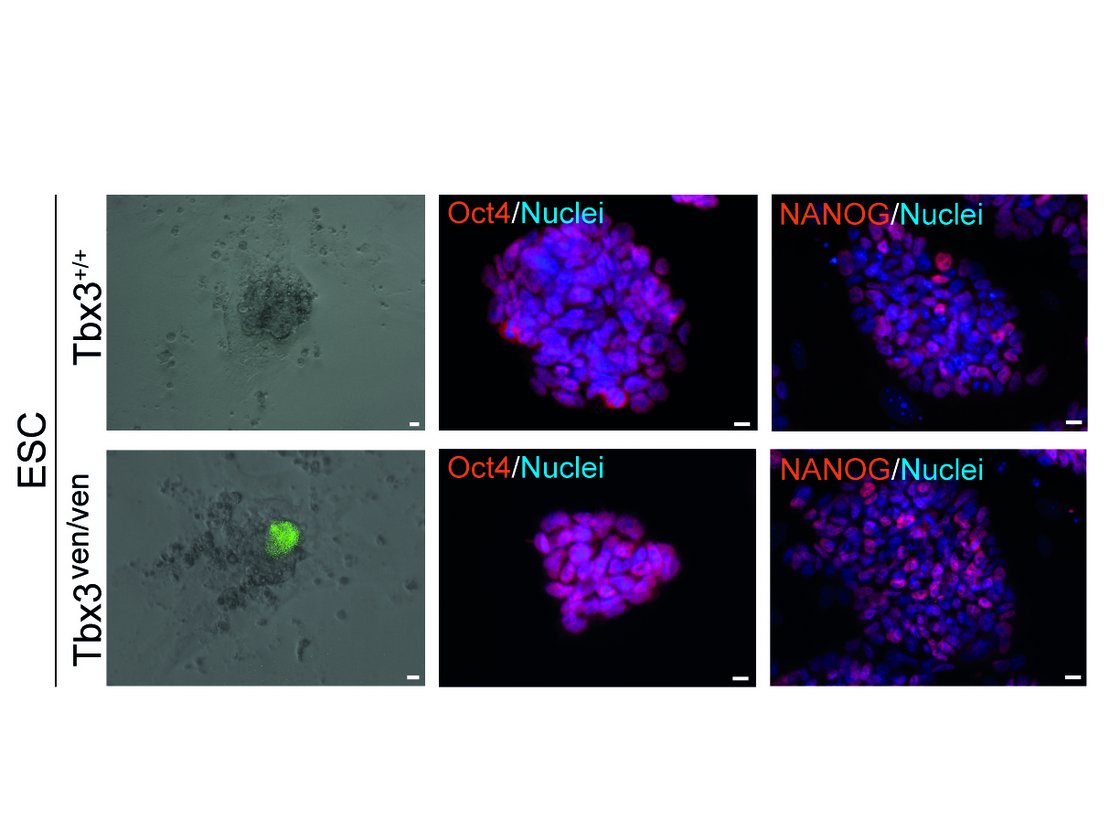 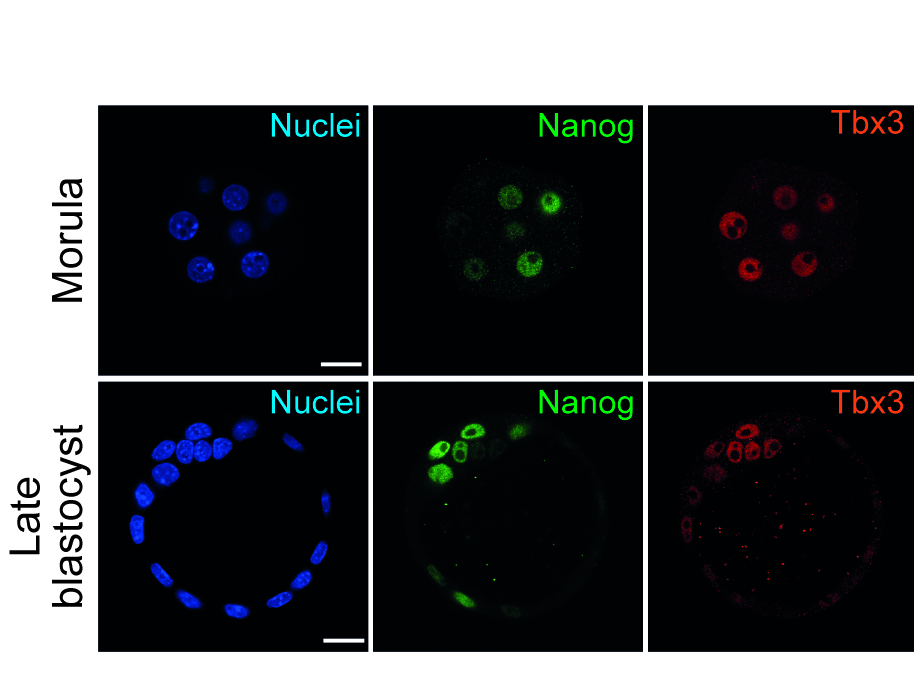 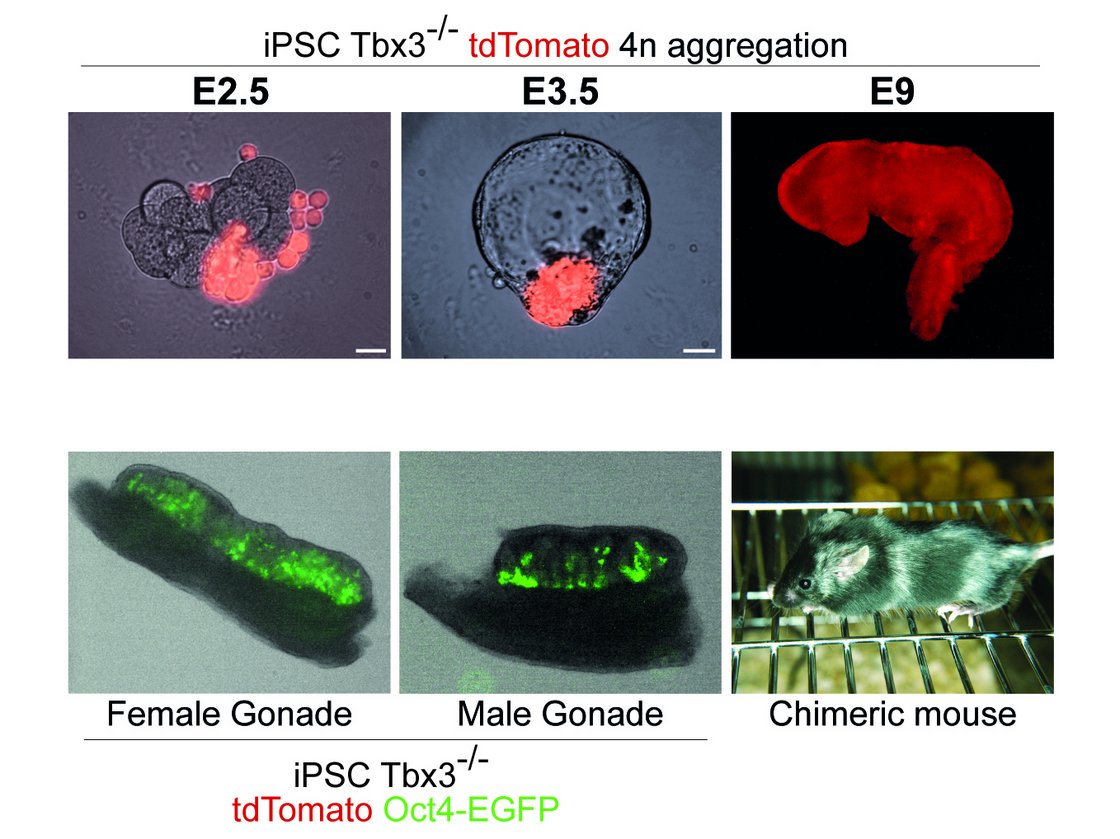 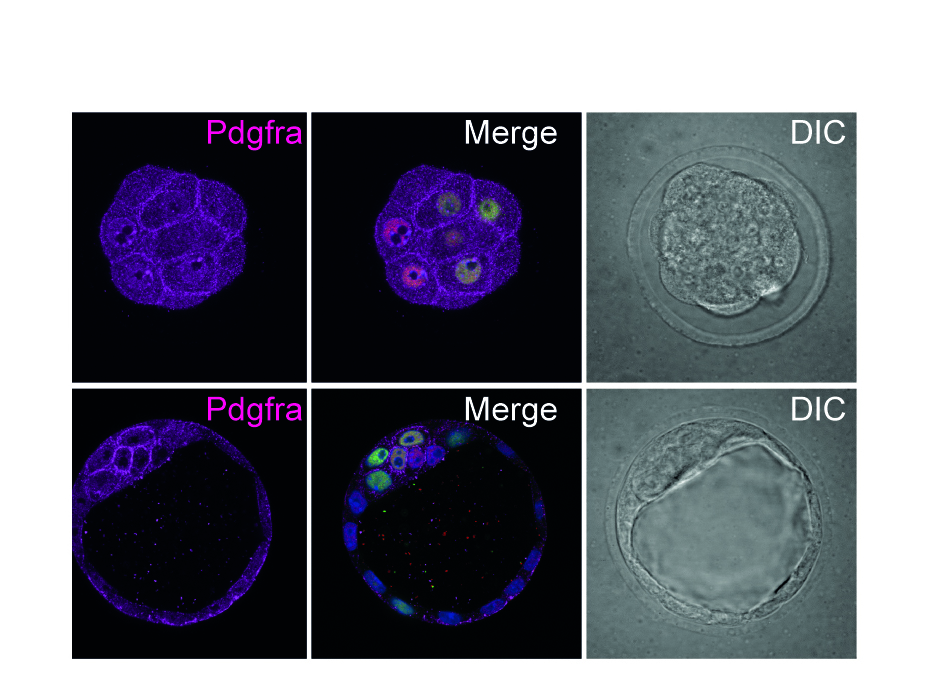