Clinical neuroimaging focuses on aspects of brain functioning that are relevant to the psychiatric clinic, and may be important for future translation of this kind of knowledge into clinical practice.

In the figure: a digital atlas of the frequency of occurrence of large vessels (arterial as well as venous), computed from a database of time-of-flight images, overlaid on a template structural image from the MNI. The digital atlas of vessels is freely available and can be found:

This is a freely available digital atlas of frequency of vascularisation, obtained from N = 38 healthy participants scanned with the time-of-flight magnetic resonance technique. Images are available in NIfTI format in different voxel sizes:

Table. Volumes made available as part of the atlas.

The main source of information is the atlas in the original high resolution. The volume contains the frequency of detection of vessels in our dataset, in percent, and may be used to visualize their course by overlaying it together with activation maps. Volumes are also provided after resampling at the isotropic resolutions of 1 and 2mm most commonly used in structural or functional studies. While the incidence of vessels in the low resolution atlas is not quantitatively identical due to the increased influence of partial volume effects, the location of vascular tissue corresponds closely to that displayed in the high resolution atlas. These volumes may be used to create masks staking out regions where the vascular density is high.

When using these data to interpret findings of other studies, it should be remembered that the quality of spatial correspondence is limited by possible difficulties in redressing differences in brain shape induced by the geometry of the magnetic field of the original volumes, by the signal loss due to different susceptibility artefacts, and the possible use of customized normalization templates across specific studies and human populations. To enable users to assess and potentially address these discrepancies, the mean TOF normalized volume from all subjects in the study is provided. This volume contains structural information that may be used to compute the cross-normalization to another template.

Notwithstanding the enormous increase in knowledge brought about by the last 15-20 years of functional and structural neuroimaging studies, their translational impact on psychiatric practice has been modest. Translational neuroimaging may require rethinking the way we analyse data and develop specific statistical approaches (as opposed to applying techniques developed to localize functional activations). Our group is active in researching statistical techniques that are relevant to translation of neuroimaging into the clinic, such as the development and use of reference imaging databases and the identification of typical sources of variance in the population. We focus on innovative quantitative imaging modalities (such as arterial spin labelling) for the identification of the neural substrate of individual differences that may be of relevance for mental health, as those emerging from genetic polymorphisms or individual differences in spontaneous emotion regulation strategies.

The Clinical neuroimaging group is led jointly by

The statistical analysis of neuroimaging data is a challenging task. Typical imaging data cover the brain using over 200.000 voxels, whose activity is reciprocally related in complex ways. We focus on the design and analysis of studies using innovative imaging modalities such as perfusion or diffusion imaging.

Related to the issue of evaluating and correcting for distributional assumptions, this study examines the effect of partial volume effects in structural imaging (here, magnetization transfer imaging). We provide maps of the extent of partial volume effects in this imaging modality, and use statistical imputation techniques to validate and improve inference on differences between a sample of schizophrenics and controls, and quantify the beneficial influence of imputation on distributional assumptions. Interestingly, periinsular areas are shown to be difficult to rescue. Imputation is a method never evaluated previously in published neuroimaging work.

Investigates effect of departures from joint distributional assumptions on inference and interpretation, focusing on arterial spin labelling data as a case study. An algebraic approach shows that joint distribution of t maps is not affected by sample size, so that whatever form it has, it does not get closer to assumptions with increasing sample sizes. It shows that when the data are more appropriately modelled multivariately, the voxelwise approach now dominant in neuroimaging leads to inferential problems and misleading effects maps. Surely, a paper expressing dissent with the current consensus on approaches to neuroimaging inference, exposing false but widespread intuitions and suggesting that neglect of multivariate methods is a mistake.

In this genetic imaging study of rest brain perfusion resampling techniques are applied on a larger database of rest perfusion to compute estimates of power for specific regions of interest, comparing detected effects of sex and age with those of the serotonin transporter. Also exemplifies modern use of computer-intensive resampling methods on large control databases to extend statistical inference.

This work establishes when a region of interest may be selected on one contrast to provide unbiased effect estimates in another contrast, a common situation in the analysis of neuroimaging data. This paper exemplifies the value of using a formal model and an algebraic approach to clarify contentious issues instead of just discursive reasoning. Individual differences are usually the parameter of interest in genetic imaging and in case-control comparisons.

We investigate here the covariance of perfusion data, showing the relative contribution of global perfusion intensity and regions at or near the course of large vessels.

Shows impact of non-normality on statistics used to correct for multiple comparisons, and investigates the use of the bootstrap, a resampling method, to adjust statistical inference. Investigates distribution and validity of inference in this diffusion imaging method. The ’single volume test’ is the test on an individual volume against a normative database, essential for translational approaches.

Investigates departures from normality in voxel-based morphometry data, estimated by likelihood maximization in a Box-Cox model. Shows how to evaluate formally the assumption that the distribution of the data is the same in all voxels, showing that in these data it is not.

This paper introduces functional data analysis in multivariate analysis of functional imaging data. Estimates are done on functions directly, enabling shrinkage of hugely multidimensional datasets towards priors defined as penalties on a differential equation form. The functional approach shows the capacity to detect the signal of interest vastly superior to standard multivariate methods.

Perfusion imaging studies show differences in basal neural function in genes which may be related to monoaminergic function. 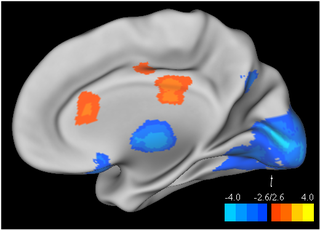 It has been long thought that CYP2D6, an enzyme that metabolizes most psychoactive drugs and is constitutionally expressed in the brain, also has a function in the brain biochemical homeostasis, associated with differences in personality, cognition, and vulnerability to mental illness. This study provides the first evidence of CYP2D6 activity in the brain by showing the association of genetic polymorphisms affecting its activity with differences in baseline perfusion.

Further evidence on the functional importance of the genetic polymorphism of CYP2D6.

Evidence on the clinical importance of genetic polymorphism of the CYP2D6 gene, providing a link to increased suicidality.

Genetic imaging study of rest brain perfusion using resampling on a larger database of rest perfusion to compute estimates of power for specific regions of interest, comparing detected effects of sex and age with those of the serotonin transporter. Also exemplifies modern use of computer-intensive resampling methods on large control databases to extend statistical inference.

A review of the marriage between pharmacogenetics and neuroimaging methods to use neurosciences to tailor treatment to individual patients.

Spontaneous regulation of emotions makes use of distinct brain circuits from those used to control emotion using voluntary efforts. 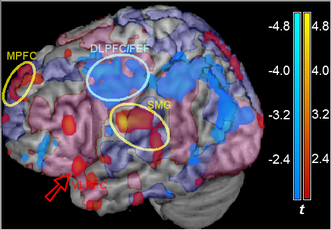 A functional arterial spin labelling imaging study using the ’scrambled sentences task’, the only known test whose score correlates with depression vulnerability and the tendency to relapse in individuals in full remission. Using arterial spin labelling, we show the involvement of the default network system, prevalenty deactivated during the explicit task.

Individual styles of emotion regulation are associated with differences in rest brain perfusion in a prefrontal region often altered in depression.

Reconsiders a hypothesis formulated in early PET studies of a relationship between working memory capacity (a psychometric index of intelligence) and rest metabolic/perfusion activity in a larger sample. This hypothesis is confirmed by the data, but we show the effect to be small. This study is methodologically important in clarifying the extent of a IQ confound in rest perfusion studies.